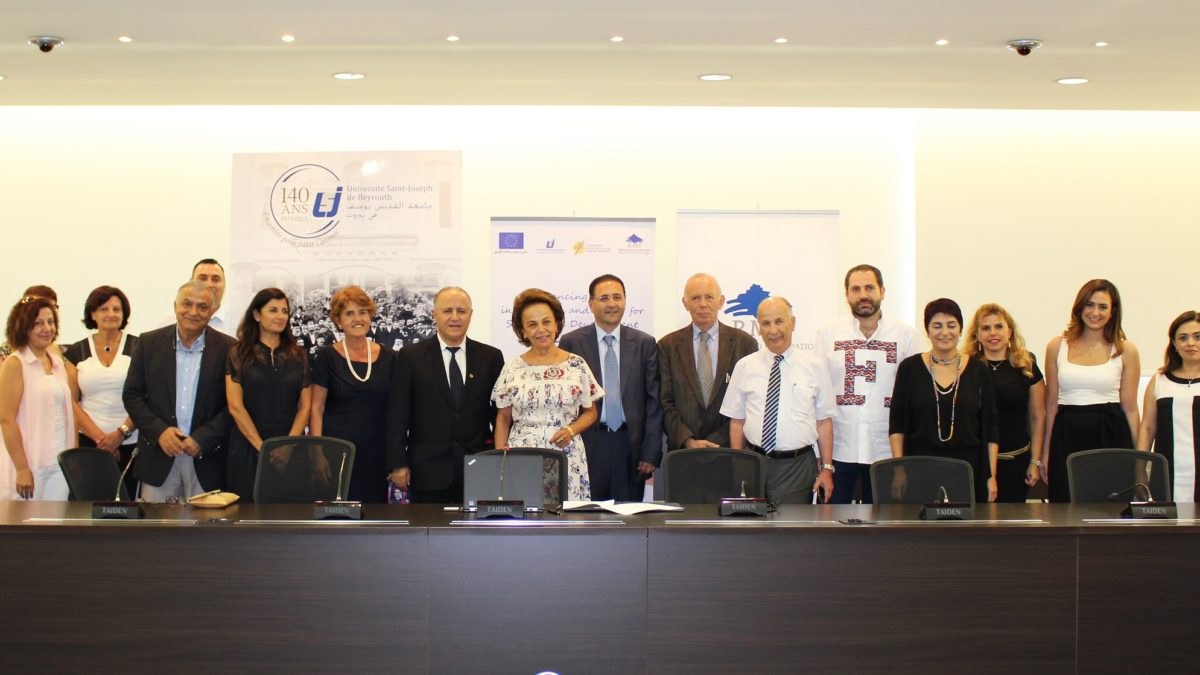 René Moawad Foundation represented by its former President Minister Nayla Moawad, signed a cooperation protocol with Saint Joseph University (USJ), represented by its Rector Professor Salim Daccache SJ, on the project “Enhancing CSOs in the North and Akkar for Sustainable Development”, funded by the European Union.
The event took place at the USJ, and was attended in addition to Mrs Moawad and professor Daccache, by Vice Rector of USJ Michel Choueir SJ, the director of the Lebanese School for social training (ELFS) Maryse Gemaa, the deputies of the president, members of boards and academicians of USJ, supervisors of the ELFS and the general manager of the René Moawad Foundation Mr. Nabil Moawad and his team.
Mrs. Moawad stated, “The René Moawad Foundation, since its inception aimed through the various projects and activities implemented across Lebanon, to translate the vision of late President René Moawad, who has long believed that balanced and sustained development is a right for all citizens to ensure their dignity and rootedness in the land.”
Mrs. Moawad added, “this project won’t succeed without the cooperation of the local authorities and the participation of all segments of civil society.”
Rector Professor Salim Daccache SJ, stressed on: “The importance of cooperation between the academic and educational sector and the NGOs to build and develop human capacity and strengthen social cohesion and stimulation of production, development and sustainable development.”
“Enhancing CSOs in the North and Akkar for Sustainable Development” project works to strengthen the capacity of civil society organizations in the North and Akkar for more durability and services allocated to the communities. This is done through the promotion of social cohesion and protection, participation and strengthening of partnership of the public and private sectors.